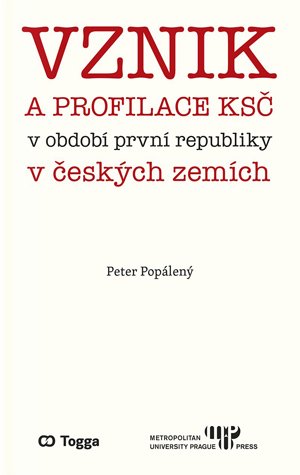 There can be no doubts that the Communist Party of Czechoslovakia belonged to political parties that influenced the development of Czechoslovakia between WWI and WWII. The subject of this book to identify the key influences that had impact on its establishment, development and profiling in the period of pre-WWII Czechoslovakia in the territory of the current Czech Republic, on a basis of the application of empiric and analytical approach.

The Sartori's theory of the antisystem party, or its later modification, is one of the theoretical starting points allowing the definition of the Communist Party itself. Individual defining features pointing to the possible antisystem nature of the Communist Party of Czechoslovakia and their comparison in various time periods of party development are of a great importance. The ideology of a political party has a significant impact on this political party profiling; in particular in case of the Communist party, it permeates the whole system of the party and in its most intense form it indicates signs of a political religion. In Bohemia, Moravia and Silesia, left-wing movements were strong, in particular, the social democratic party, from which the communist fraction split off, was one of the key players in the establishment of independent Czechoslovakia. After its institutional establishment in 1921, the Communist Party already represented the Communist ideology, which further developed under the influence of the Communist International, representing the Soviet Bolshevik model built on Lenin foundations and later on Stalinist methods of dictatorship.