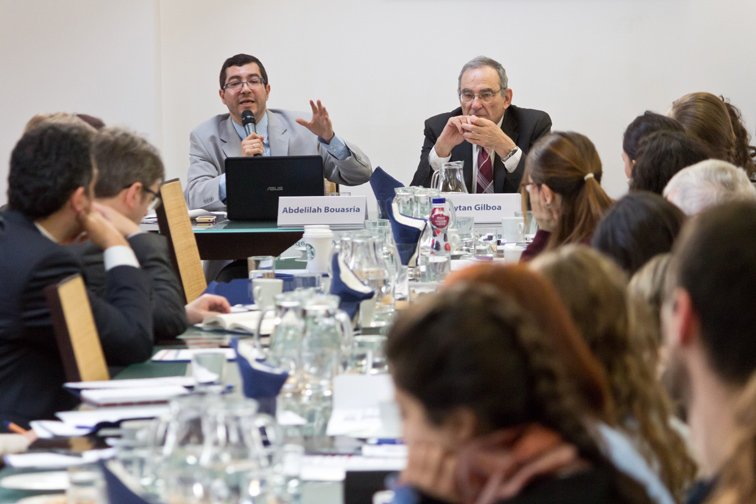 The Iberoamerican Centre (IAC) and the Centre for Middle Eastern Studies (CMES) at Metropolitan University Prague organised a conference on "The Foreign Policy of the United States".

The Trump Administration has outlined its America First foreign policy, which is focused on American interests and American national security. This conference inquires into how the presidency change at the White House is likely to reshape the foreign policy outlines of the United States of America for the Middle East, Europe, Asia and the Americas. Distinguished speakers contemplate what can be expected from the new administration’s foreign policy focus on American interests and American national security in the coming years.

12.00 A Triangle on its Head?: Russia, China, and the US under Trump
Dr. Martin Hála, Director of Sinopsis.cz, a joint project of AcaMedia and the Institute of East Asian Studies at Charles University in Prague, Czech Republic

Prof. Eytan Gilboa (Israel) is a distinguished scholar of political science and communication, renowned in Israel and internationally for his expertise in public diplomacy, international communication, and US policy in the Middle East. He was founding director the School of Communication and the Center for International Communication at Bar-Ilan University in Israel. Prof. Gilboa received his PhD from Harvard University and has been a visiting professor in several leading American and European universities including Harvard, Georgetown, UCLA, USC, and the University of Hamburg. He has written many books and numerous articles and has won international prizes.

Dr. Abdelilah Bouasria (Morrocco) is an expert in the field of education, international development, Counter-Terrorism, Political Economy, international security, and diplomacy. He holds a PhD from American University, a Masters from Sussex University, UK and a B.Com from McGill University. His specialties are the MENA region, peace and conflict resolution, gender and religion and politics.

Dr. Schuyler Foerster (USA) is founding principal of CGST Solutions, a consulting firm specializing in national security policy and civic education. From 2010-2016, he served as the Brent Scowcroft Professor of National Security Studies at the U.S. Air Force Academy and now serves as a visiting professor at Colorado College in Colorado Springs. During his 26-year U.S. Air Force career, he served in several capacities as a senior advisor in security and arms control policy. A graduate of the U.S. Air Force Academy, he holds a doctorate from Oxford University in politics and strategic studies, as well as masters degrees from the Fletcher School of Law and Diplomacy and the American University in public administration and international relations, and he served as a national security fellow at Harvard University’s John F. Kennedy School of Government. During Spring 2017, he is in Brno, Czech Republic, as the Fulbright Commission’s Distinguished Chair in Social Studies at Masaryk University.

Dr. Martin Hála (Czech Republic) is the founder and director of Sinopsis.cz, a joint project between AcaMedia and the Institute of East Asian Studies at Charles University in Prague. He studied in Prague, Shanghai, Berkeley and Harvard, taught in Prague and Bratislava and led projects in various countries in Asia. In 2014 - 15, he was the Regional Manager for Asia Pacific at Open Society Foundations.

R. Gordo Núňez (Cuba) is an independent Cuban journalist who holds a Bachelor’s degree in Journalism from the University of Camagüey, Cuba where he also worked for two years as a Professor of Journalism. He is currently working in the field of investigative journalism with international NGOs.

Ing. Břetislav Tureček is the head of the Centre for Middle Eastern Studies (CMES) at Metropolitan University Prague. As a former journalist and correspondent in the Middle East he published four books on the region. Mr. Tureček is currently a PhD. candidate in cultural anthropology at Palacký University in Olomouc, Czech Republic.